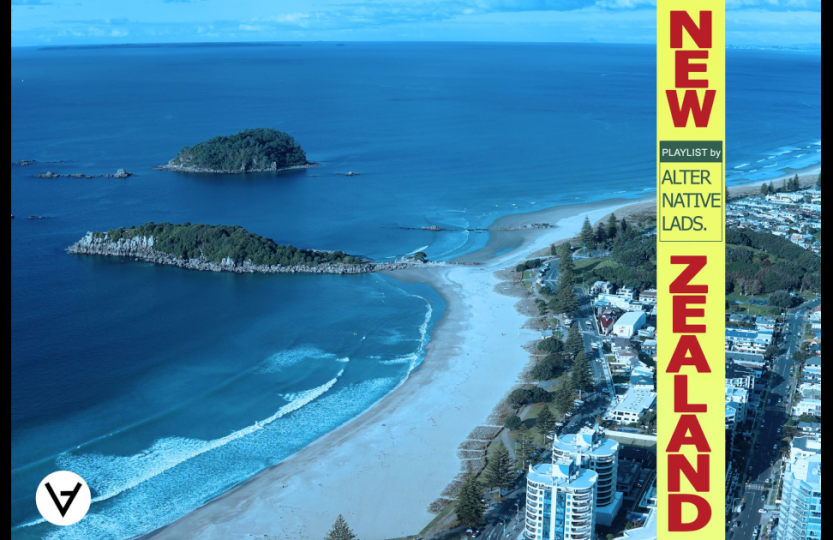 Welcome to New Zealand! The emblematic country of The Lord of the Rings, where the proud All Blacks and the legendary kiwis (birds that can’t fly) dwell. As difficult to see in the wild as being awarded a Psyduck in Professor Oak’s lab. If Middle-earth has become one of the backpackers’ favorite destinations to experience the Van Life adventure, it still remains too unknown to the general public regarding its musical wealth. Luckily for you, dear readers, your special correspondent Pedro is here to take you on an audio road-trip through what Maori call the Land of the Long White Cloud (Aotearoa).

Listen to the playlist on streaming platforms

We begin our journey with Aldous Harding. This singer/songwriter was revealed in 2014 by one of the country’s leading independent labels, Flying Nun Records, founded in Christchurch. This label has signed other major kiwi artists such as Laurence Arabia, Mermaidens, The Phoenix Foundation… Aldous Harding then signed to London-based 4AD Records for the albums Party (2017) and Designer (2019). She represents the new generation of folk artists, a popular genre inseparable from the road-trip experience.

We continue our trip with Oils and Perfume, the latest title from the Glass Vaults band, released at the end of April 2020. These good friends, from Wellington, asked their close relations to film themselves dancing at home for their video. A great immersion in the intimacy of New Zealanders, then in total isolation to avoid the spread of the new Coronavirus. Their album The New Happy (2017) is also excellent and will satisfy fans of Talking Heads or Tom Tom Club.

Connan Mockasin – I’m The Man, That Will Find You

Now, I suggest that you take a short break to admire this superb view from Mount Maunganui (cover picture) and give me time to introduce you to one of the most important artists, in my opinion, of the last decade.

In 2011, on our high school’s library, my friend Jules made me listen to a remix of Forever Dolphin Love by Erol Alkan. The original song is signed Connan Mockasin, totally unknown to me. I then discover a style never heard before, with his first eponymous album Forever Dolphin Love (2011). A new sound characterized by a clear guitar with predominant chorus effects, played in picking (with the strings plucked with the fingers and not with a pick). A slow rhythm, rather repetitive and sometimes ambient. And above all a confusing voice: high-tone with occultism aspects.

From the exit of this library to today, Connan Mockasin remains in my opinion one of the rare musicians whose universe and musical style cannot be linked to any other. Some of his sound characteristics will obviously serve to others (hello Mac DeMarco), but artists like him, The Doors or Gorillaz, can hardly serve as inspiration without suspicion of clumsy mimicry. The whole thing gives a deeply psychedelic style, weightless feeling, as if we had ingested a powerful acid and dived into a trip through forty fathoms of water. And yet it is only nine years later that I finally realize the 100% New Zealand origin of the product Connan Mockasin…

But let’s resume our adventure to discover more about the early settlers of Aotearoa. Better known as seasoned sailors than half-men in love with things that grow, the Maori landed in successive waves from Polynesia during the first half of the 14th century. Although they represent only 15% of New Zealand’s population today, Maori culture remains firmly rooted in the country and their Haka (a sung dance designed to impress their opponents) has made these people world famous. Concerning their music productions, I suggest you listen to the 90’s hit Kua Makona (= to have satisfied), which at the time resonated throughout the Pacific. A track that smells of good sunshine and warm sand.

The Black Seeds – Cool Me Down

In just three months time, New Zealanders are set to decide the fate of their country. Indeed, the whole nation is called to vote in a non-binding referendum on 19 September 2020 on whether or not to legalize cannabis. If the yes vote wins, New Zealand would join the still closed club of states where the use of this plant is not considered illegal. While waiting for this possible historic event, let’s look at how kiwis smoke their spliff in secret (or not).

Unlike the French, or many other nationalities, who cut the weed with tobacco, it is customary in Aotearoa to roll the holy cone completely pure. Considering the price of the 30g packet over there (60 NZD, or 35 EUR), we can see why. For the atmosphere, reggae and dub are very popular genres, of which The Black Seeds can be considered one of the spearheads in New Zealand. Founded in Wellington in 1998, this eight-member band led by Barnaby Weir has galvanized fans of this style around the world thanks to their live performances, some of the most acclaimed.

On the hip-hop side, Middle-earth is not to be outdone either. Raiza Biza is one of a host of rappers jostling for success. Born in Rwanda, he spent part of his childhood in the Democratic Republic of Congo, Zambia and South Africa before settling permanently in New Zealand at the age of 13. He was then the only African child in his town and his father explained to him his duty as such to represent his entire community in the eyes of New Zealanders and to be proud of his origins. With his latest album Bygones (2019), he explains his desire to draw a line under his past and build his own legacy to pass on to his children later on, just as his father did for him.

All right, it’s time to shift to gear 5 (let spare a thought for automatic car drivers who don’t get the metaphor…) with the tornado Miss June! After Matriarchy, a 5-track EP released in 2015, Auckland’s fastest and loudest band releases Bad Luck Party, their debut album, in September 2019. This young punk-rock band has already caught the eye of big names of the genre such as The Foo Fighters or Idles. With their dirty riffs and Annabel Liddell’s explosive voice, Miss June may finally sound like the worthy successor to Sonic Youth that the rock world has been waiting for. So stay tuned.

At just 20 years old, Stella Rose Bennett, aka BENEE, already has everything she needs to become New Zealand’s next pop superstar. Following the release of the single Tough Guy in 2017, BENEE released her debut EP Fire On Marzz and won 4 awards at the 2019 New Zealand Music Awards: Single of the Year (for Soaked); Best Solo Artist; Best Breakthrough Artist; Best Pop Artist.

To top it all off, her latest single Supalonely gives her international exposure, thanks to the popular success of the track on the video sharing platform TikTok. She announces the release of her first album for this year 2020, with a drastic change of style compared to her previous compositions. Let’s hope for this rising star that this album will convert the Fire On Marzz try, as BENEE may well become the most recognized kiwi artist in the world. A recognition that only Lorde has achieved so far.

Last step before the end of our road-trip. We find back the label Flying Nun Records with one of its best elements: The Phoenix Foundation. Name inspired by a fictitious organization on the television show MacGyver, this indie rock band was born in Wellington University in 1997 and recorded six albums so far. To celebrate the tenth anniversary of the album Buffalo, The Phoenix Foundation released a special edition with new tracks this year. The band also stands out for its involvement in cinema, participating in the original score of the films Eagle vs Shark (2006) and Boy (2010), by New Zealand director Taika Waititi.

Although based in Portland (Oregon, USA), it is two New Zealanders who are at the origin of Unknown Mortal Orchestra (UMO). Like Tame Impala or King Gizard & the Lizard Wizard, UMO is part of the new psychedelic wave that hit Oceania at the beginning of 2010, with a touch of mystery in their early career. Indeed, singer and guitarist Ruban Nielson publishes his song Ffunny Ffriends on his Bandcamp page, devoid of any information about its creator. However, the song soon aroused interest among specialist websites, such as Pitchfork, and a manhunt began to find its composer. Ruban Nielson finally admits that the song is signed UMO, and thus marks the beginning of its history.

Having attended their concert on 28 May 2018 in the mythical Ancienne Belgique hall in Brussels, I can testify to the ardour these guys display on stage. With a more saturated sound and epic guitar solos punctuating their songs, UMO does not hesitate to offer new sounds compared to their studio recordings.

An amazing band that brings our musical journey through New Zealand to a fitting conclusion!

Listen to the playlist on streaming plateforms

Pedro from NZ with love